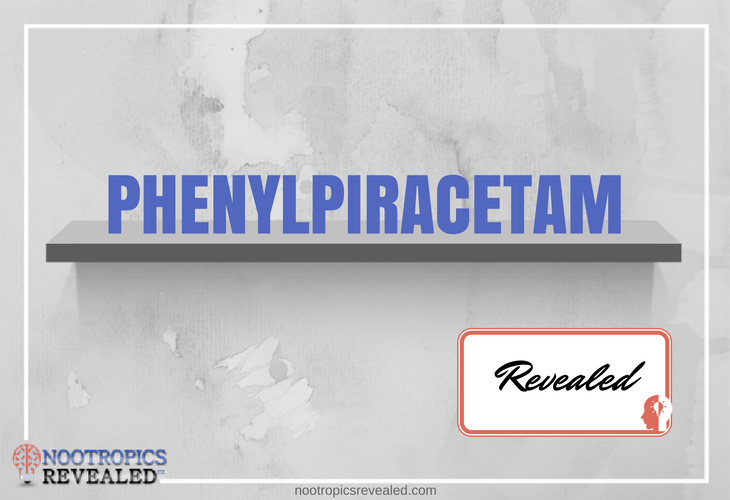 Phenylpiracetam was developed in the early 80’s in Russia. It is a modified version of Piracetam, the original nootropic, and is also known as Phenotropil or Carphedon. The modification lies in the addition of a phenyl group molecule to the original structure causing changes in pharmacokinetic properties of the piracetam.

The structure of the drug molecule consists of a single chiral center of a carbon atom of quaternary pyrrolidone cycle used in pharmaceutical practices which is a mixture of R- and S- enantiomers.

Against Piracetam, the parent molecule, Phenylpiracetam is up to sixty times more potent and much more bioavailable. It is also reported and argued to be more neuroprotective than Piracetam is. This type of racetam also happens to be water soluble and is often taken in capsule form. It is usually consumed for enhancement of mood, focus, energy, attention and learning.

Research suggests that Phenylpiracetam is effective, alike other Racetam drugs, in the reduction of the rate and symptoms of cognitive decline. The drug is stated to work on organic causes of cognitive decline such as dementia or stroke, then cases of brain injuries caused due to trauma.

Symptoms associated with cognitive decline such as depression and anxiety have also been seen to be attenuating in open label trials. Another purpose of the drug, although not sufficiently researched, is that it may possess immune-supportive properties in cases where the subject had been under a period of immune stress.

The drug acts as a neuromodulator. It has noticeable effects on cholinergic and glutamatergic systems. It appears to have psychostimulatory effects and the addition of Phenyl to it eases the drug’s pathway through the blood-brain barrier, reducing the dosage significantly.

Consequently the drug remains in the system for a longer period of time and actively so with a half-life of almost five hours. The drug becomes active within an hour of ingestion. It is then metabolized into 3-hydrocarphedone and 4-hydroxy carphedon.

How Does Phenylpiracetam Work?

The reason why it has mood elevating and stimulating properties is because the compound increases the levels of dopamine and noradrenaline in the brain. This drug also has the capacity to modulate loco-motor activity in the brain. In terms of technical functioning, Phenylpiracetam is understood to increase the density of NDMA glutamate receptors in the hippocampus of the brain.

It has also been observed to stimulate nicotinic acetylcholine receptors in the cortex, along with D3-dopamine receptors in the striatum. Dopamine does not just affect mood but also body movement and this would explain why the drug is also effective in reducing motion sickness

It also produces cleaner stimulant effects, according to many reviews. The experience would resemble with consuming a drug like Adderall. Although Adderall being an amphetamine based drug, has side effects that aren’t as safe as those of consuming phenylpiracetam.

Phenylpiracetam is excreted from the body by urination, at almost 60% and the remainder through bile.

Phenylpiracetam is banned by the World Anti-doping Agency, which is the most active during Olympics, due to its reported psychostimulatory traits and cold-resistance properties. It has been observed to have no direct effect on cardiovascular or respiratory systems but it does reduce the body’s pain tolerance, as well as the body’s adaptability to environmental stressors.

The recommended dosage is from 100gms-200gms a day for an adult. It is sold both in tablet and capsule forms and should be consumed twice a day. The course duration is usually three weeks to a month, often depending on the case. Although it is advisable to consult a doctor before consuming any kind of nootropic drug.

Possible Side Effects of Phenylpiracetam

Consumption of the drug increases the demand for acetylcholine in the brain, leading to headaches. Nausea, gastrointestinal upsets and irritability have also been reported. But much of these can be reduced by the intake of a choline supplement. A significant number of cases have also reported insomnia.

It may also cause tolerance build up much faster than other racetams have been observed to. The drug also has a low addiction profile.

But alike all nootropic drugs, it does have both long term and short term effects. A constant introduction of artificial stimulators in the body may lead to a depletion of a different kind, say a nervous and emotional exhaustion. Long term courses would also require treating withdrawal symptoms.